We're Getting Mutants in the MCU - The Loop

Here's something odd: there is a cat hovering in the men's bathroom at the radio station here. He seems perfectly happy and healthy, but it's floating about four feet off the ground next to the sink.

Khoshekh Gershwin-Palmer[2][3] is a floating cat who resides about four feet above the ground next to the sink in the men's bathroom of the Night Vale Community Radio Station.

He appeared in the men's bathroom during the episode 2 and was adopted soon after as the station pet. He purrs and rubs on your hand like a normal cat, but is trapped in a floating prison and cannot travel. Cecil admits that while he is normally not a cat person, he has grown to love the cat, which has been named Khoshekh. The men of the station care for Khoshekh by leaving the sink running so that he has drinking water. They also take turns buying Science Diet Low-Calorie Cat Food for the immobile feline, which they leave on the counter where he can easily reach it.

As of Episode 159, "Cat Show", Khoshekh is stated to have white socks, black tails, spine ridges, tentacles, pincers, wings, a stinger, more than two eyes, and five rows of teeth. He is able to produce both ordinary feline mews and low, guttural growls.

In the two-year anniversary live show, it is revealed that Cecil, being one of the few who actually cares about Khoshekh, has taken to carving sculptures of the beloved "Feline", and posting said sculptures on his Tumblr blog. The Tumblr URL is currently unknown (or may not exist in real-world Tumblr), and no pictures of said sculptures have been found.

Due to the fact that Cecil is Jewish (according to Joseph Fink, as of "Ghost Stories"), Khoshekh's name is a Hebrew word- חושך, meaning "darkness".

Despite being a tomcat, Khoshekh gave birth to a litter of kittens in Episode 23, "Eternal Scouts". They were all adopted by Episode 26, "Faceless Old Woman", but, since they cannot be removed from the station men's room, their owners must visit them there. Like Khoshekh, they are floating in the station men's room, but at different heights. It is not clear how many kittens there are.

Some known named kittens (and their owners) are:

Khoshekh’s features cycle in and out, they never have all their features at once. 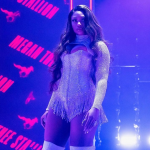